James Hampton had diligently paid the $50 per month fee to rent the old stable building behind 1133 7th Street NW, not missing a payment in the 14 years since he took possession of the drafty building.  But in November of 1964, landlord Meyer Wertlieb, the owner of the Red Ball Exchange Pawn Shop at 1228 7th Street NW (motto: “We Buy and Sell.  All Sales are Final”), didn’t receive his check.  When Wertlieb cut the lock and entered the building, this is what he found: 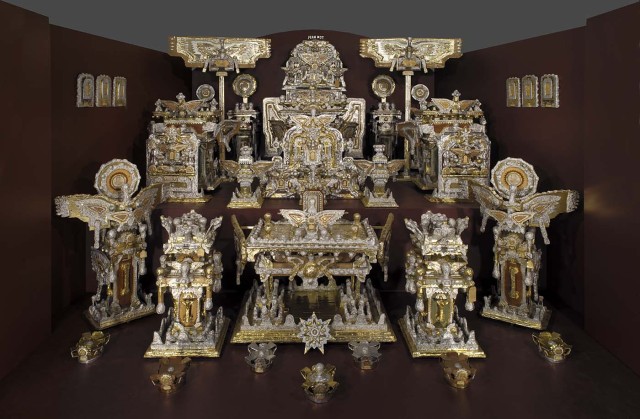 In the center of the work was an elaborately decorated throne with original maroon cushion and the words “Fear Not” overhead.  Two headless and winged objects labelled “Adam and Eve” stood tall.  Cards tacked to individual pieces contained bible verses in English as well as phrases in Hampton’s self-created hieroglyphic language.  A series of ringed binders and clipboards held a collection of Hampton’s writings labeled Archives of the State of Eternity, naming him “St. James, Director for Special Projects for the State of Eternity”, with the last word reading “Revelation”.  Clipped to a bulletin board were a 30 year old newspaper clipping with a picture of Reverend and Mrs. A.J. Tyler, and a Pan Am ad bearing a photo of the Mount of Olives.  On a blackboard there was “what looks like a master plan, built around the ten commandments.  But one cannot be sure.”  And a lone piece of paper tacked to the wall stated “Where there is no vision, the people perish.”

James Hampton was born in 1909 in Elloree, SC to a self-ordained minister and gospel singer who left his wife and children to follow his “itinerant calling”.  At 19, Hampton migrated to Washington, D.C. where he stayed with his brother’s family and was a short order cook.  Three years later, Hampton has his first visitation:

This is true that the great Moses the giver of the 10th commandment appeared in Washington, D.C, April 11, 1931.

He believed that God appeared to him in real life, not in a dream.  In 1942, he was drafted into WWII and traveled to the Pacific where he served as a carpenter.  In Guam, he built a small, shrine-like object that he later incorporated into the Throne.  In 1945, he was honorably discharged and moved back to a Washington, D.C. boardinghouse, where he lived the rest of his life.  In 1946, he started working for GSA as a janitor and had another vision:

It is true that on October 2, 1946, the Great Virgin Mary and the Star of Bethlehem appeared over the nation’s capital.

In 1950, Hampton rented the warehouse in back of 7th Street and began constructing his master work, arriving home from the GSA at midnight and working on his project for 4-5 hours per night.  He traveled the neighborhood with a gunny sack and children’s wagon to collect discarded objects, paying neighborhood indigents for the foil from their wine bottles.  Although he desired to find a “holy woman” to help with his work, he never found her.  In 1964 he died of cancer and Wertlieb discovered his masterpiece.

Wertlieb first offered the work to Hampton’s sister, who glimpsed the shrine when she came up from South Carolina to claim her brother’s body.  She either did not have the funds or had no inclination to take it.  Wertlieb was sympathetic, and managed to get attention from the press: “You can’t just destroy something a man devoted himself to for 14 years,” he told a Washington Post reporter.  “It seems to be an example of the futility of life.”

But it was the shrine’s destiny to be saved.  When Wertlieb put an ad out to rent the stable as art space, sculptor Ed Kelly came to look.  He brought art collector and “grande dame of the DC avant garde”, Alice Denney, to see Hampton’s masterpiece, and she brought everyone: congressmen, ambassadors, and artists.

A friend of Smithsonian curator Harry Lowe sent him a newspaper clipping about the Throne as a joke, asking if he had gilded the Spirit of St. Louis yet.  Lowe didn’t see the humor.  He was fascinated and went down to see the Throne himself: “Imagine what is was like to slide back that heavy warehouse door and see all that tinsel glittering inside.”  Overwhelmed by what he saw, Lowe acquired the Throne for the Smithsonian’s Collection of Fine Arts (now the Smithsonian Art Museum).

Robert Hughes of Time Magazine wrote that the Throne “may well be the first work of visionary religious art produced by an American.”  Sarah Booh Conroy thought that Hampton was a man out of time:

Hampton should have been born in Peru, with the silver and gold of the country and the support of the Catholic church, or in middle Europe, in the days of the great cathedral builders, with the majesty of Rome to sustain him.  Then he could have carved his vision out of fruitwood, gilded it with gold leaf, ornamented it with sterling silver, topped it with gold.

Hampton’s folk art masterpiece is currently on display in the Smithsonian American Art Museum’s Folk Art gallery.  If you can’t travel down to the museum to see it in person, you can take a personal online tour and zoom in on individual pieces here.