At the end of June, after months of opposition by local D.C. officials, Texas Representative Ted Poe withdrew his push to turn D.C.’s local World War I Memorial into a national monument.  The 47 foot tall Doric temple, which commemorates District residents who served in the Great War, was the first memorial in West Potomac Park and remains the only District memorial on the Mall.  The memorial was funded by D.C. organizations and citizens, and was dedicated on Armistice Day in 1931.  The cornerstone contains a list of 26,000 Washingtonians who served in WWI, and the names of the 499 who died are inscribed in its base.  The National Park Service recently completed a restoration of the crumbling structure.  If you haven’t visited this tree-shaded spot, you are definitely missing out. 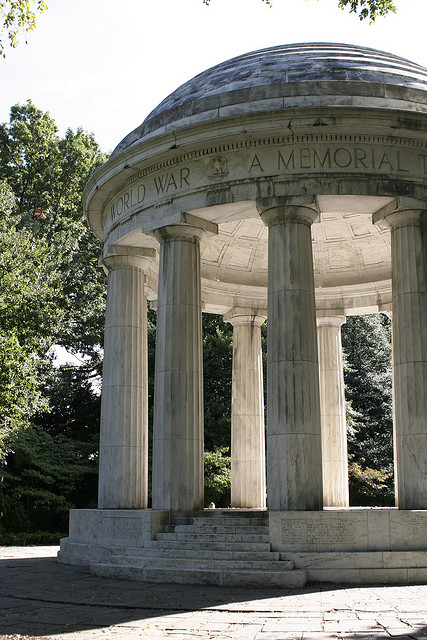 While I fully respect the intentions of Poe (and Frank Buckles, the recently deceased last living US veteran of WWI), it does seem a little strange to create a national WWI memorial.  Because there already is a national WWI museum (which should be the national memorial).  In Kansas City, Missouri.

A visit to the beautiful and thoughtful National World War I Museum at Liberty Memorial made me wonder what Poe’s fuss was all about.  Sorry it’s not in DC, but this place is a perfect memorial.  A little history:

Just two weeks after the Armistice, Kansas City leaders met to discuss the need for the creation of a lasting monument to the men and women who had served in the War, and most notably to those who had died…A community-based fundraising drive in 1919, organized and led by the Liberty Memorial Association, raised over $2.5 million in just ten days. This staggering accomplishment for the time reflected the passion of public sentiment for the Great War that had dramatically changed the world. Following the fundraising drive, the Kansas City Chapter of the American Institute of Architects held a national architectural competition to choose a design for the Memorial. The competition resulted in the selected design by architect H. Van Buren Magonigle.

The site for the Liberty Memorial was dedicated on November 1, 1921. On this day, the supreme Allied commanders spoke to a crowd of more than 100,000 people. It was the only time in history these leaders were together in one place. In attendance were Lieutenant General Baron Jacques of Belgium; General Armando Diaz of Italy; Marshal Ferdinand Foch of France; General John J. Pershing of the United States; and Admiral David Beatty of Great Britain. President Calvin Coolidge delivered the dedication speech to a crowd of 150,000 people…

Over time the physical structure of the Liberty Memorial deteriorated, and in 1994 it was closed due to safety concerns. The Liberty Memorial Association had been collecting objects and documents related to World War I since 1920, and the new museum was envisioned as an inspiring and engaging experience for visitors showcasing the collection, much of which had never been viewed. Prior to the expansion, the institution had only 7,000 square feet to present exhibits. The new museum was built as an 80,000-square-foot, state-of-the art facility. In total, the Liberty Memorial Association raised $102 million dollars for the restoration and expansion. Supporters included the City of Kansas City, the State of Missouri, the United Sates Federal Government, and generous individual donors.